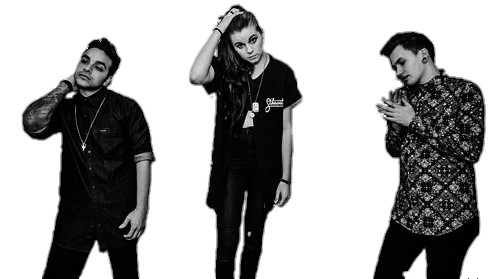 Being originally based on the metalcore band Operation Guillotine in 2012 in the city of Lowell, Massachusetts, three its members decided to create another group, combining pop-rock with touch-sensitive electronics motives: and in such a way was the beginning of PVRIS. The group was established in 2012 under the name Paris but was replaced for various juridical cases in 2013. Up to now, PVRIS line-up is unchanged: soloist Lynn Gunn, Brian MacDonald on bass and guitarist & keyboardist Alex Babinski.

Releasing the first eponymously-titled EP on March 23, 2013, the band began to flourish very quickly and attract people's attention after touching on the Warped Tour along with such popular bands as A Skylit Drive, Mayday Parade and Tonight Alive, having only one EP on hands and a couple of singles.Next step was releasing full-length musical opus. Throughout the whole time, they carefully concealed their activities creating an atmosphere of secrecy and excitement around their new material.

PVRIS announced the signing of a contract with Rise / Velocity Records on June 18, making them the first and only band with women's vocals on the label. After that, PVRIS issued the first single "St. Patrick" from the upcoming album on June 20th, 2014. Finally, their debut album called "White Noise" came out on November 4, 2014. His most striking singles were such songs as "My House", "The Empty Room Sessions" version of the song "My House". Later, PVRIS dropped the official video for the song 'White Noise' on March 25, 2015 and started preparing for a subsequent studio record.

Lynn Gunn posted a photo on her tweeter, which featured 45 songs that were written for the second studio album on July 27, 2016. Since then it has become clear that the next release will be ready soon. Thereafter, PVRIS presented another single "Heaven" taken from their brand-new overall on Radio 1 Rock Show on April 30, 2017. Subsequent work ‘All We Know of Heaven, All We Need of Hell’ was unveiled on August 4. Currently, the band are widely considered as prominent representatives of modern electronic and synth-pop music, they are among the first successful acts to popularize the genre today.